How to check keywords positions and Google ranking in 2022?

Rankinity is a professional indicator of your SEO performance in organic search! 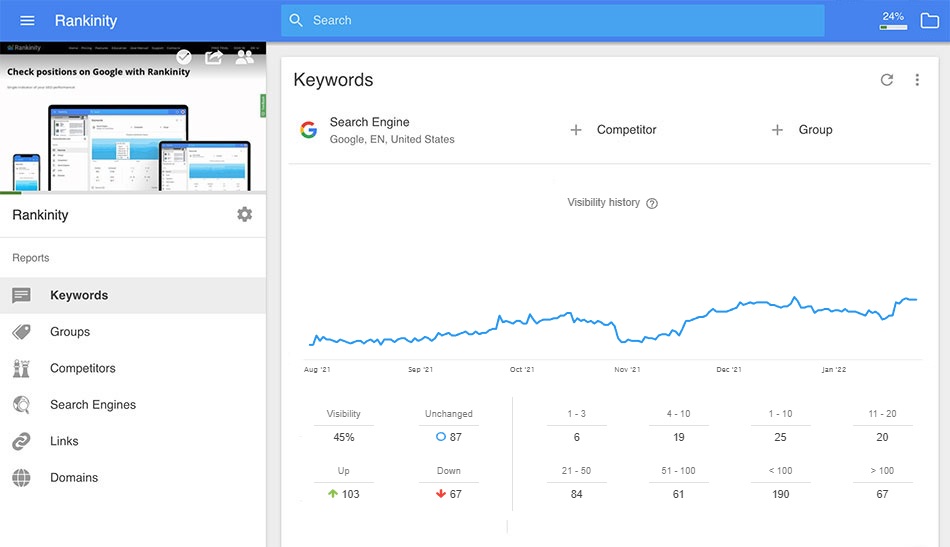 Need to check positions on Google? The answer is here:

How to check Google ranking?

- What is Google keyword ranking?

- What traffic checking tool to use?

How do you do your SEO? Situate or rely on data?

- What is keyword position?

- How to use our keyword position checker?

- How to use keyword position tool to do the miracle in your SEO?

Is it possible to determine your organic ranking in Google with utmost accuracy in 2022?

- How it was possible in Google Webmaster Tools 12 years ago back in 2010?

How to check Google ranking? 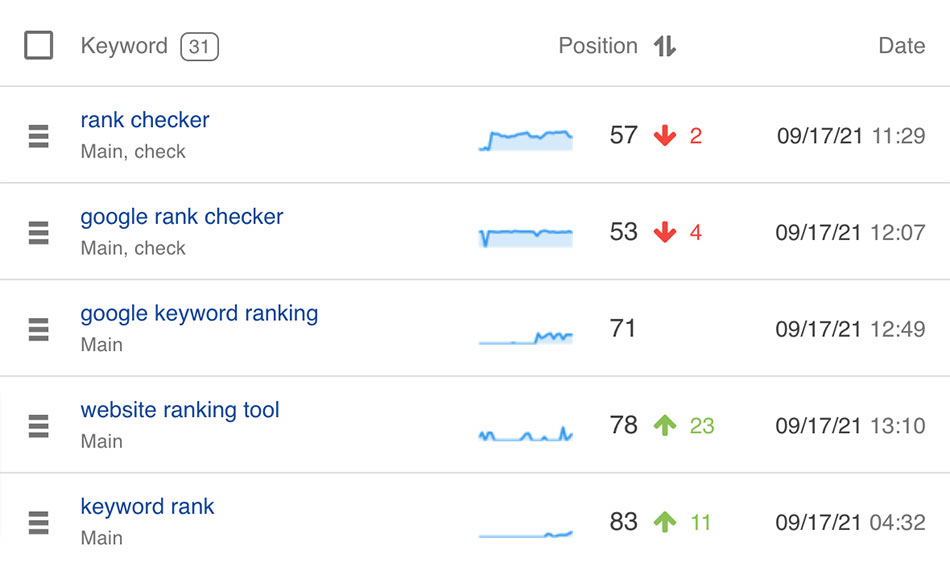 Rankinity (our SEO Google ranking checker tool) will help you find the keywords that your website is ranking well for. Increasing positions for that keyword will result in more organic traffic, which will have a very good impact on your SEO. Sign up to identify the keywords you need to get up on the first page!

What is Google keyword ranking?

Google keyword ranking is the number of search position your website ranks, when a user types their query into Google. A ranking of 1 means that you are at the very top. If you are at number 12, 15 or 18, it means that you are on the second page of Google results (usually one page has only 10 positions by default).

What traffic checking tool to use?

How do you do your SEO? Situate or rely on data?

To compete effectively for top positions in search engine results pages (SERPs), you must rely only on data. Under no circumstances you should act blindly. All that awaits you (in this case) is a decent waste of time.

One of the most important metrics (to pay attention to) is the position of your website in SERP for the keywords on which you are promoting. Ignoring your website positions will most likely lead you to act at random, and this in turn will result in choosing an incorrect promotion strategy and the wrong formation of your content plan. All you need to find out the positions is Rankinity.

What is keyword position?

Keyword position is the rank or runk that your site holds in the search engines (in relation to other competing sites for a given keyword). In order to work effectively in SEO any website owner or marketer should always be focused on capturing and holding the top spot in SERPs, i.e. becoming a leader for a given keyword. 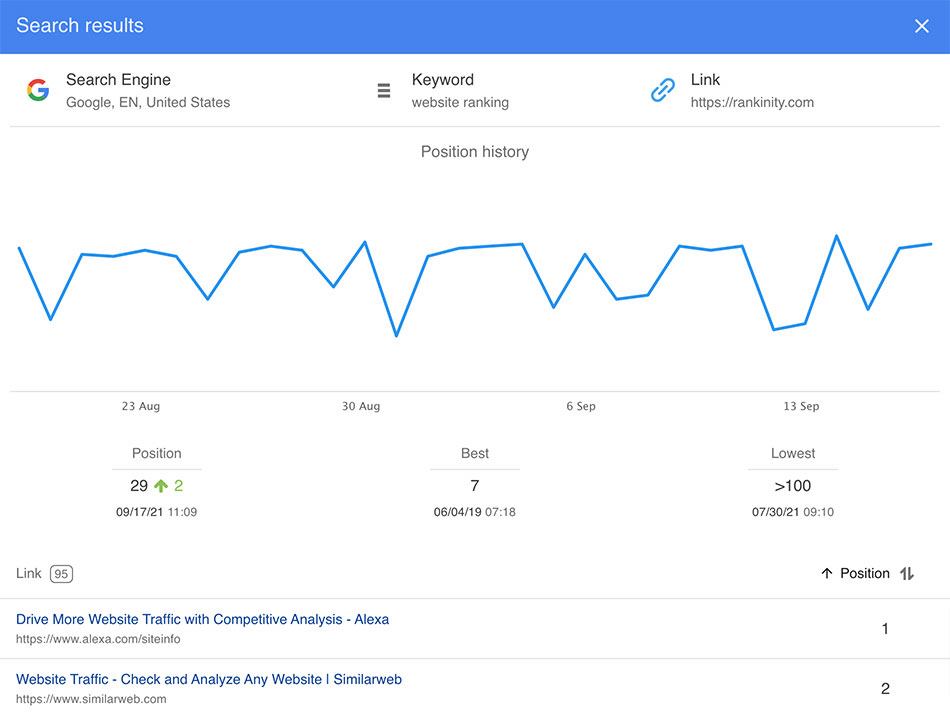 To achieve this goal, it is imperative to know the position of your website and the position of your competitors. With this information, you will be able to develop an effective SEO strategy that will lead you to your goal. Of course, it can take a pretty decent amount of time, but your positions will gradually grow and you will see that you are going the right way. If positions are dropping - something is going wrong. The trick is that you always need a tool which shows your positions. And what is the first step you need to take? Get your positions!

We know the importance of position monitoring in SEO. We developed Rankinity to perform keyword rank checks as quickly as possible. Register with Rankinity, enter your website with a list of keywords and you will get your Google's position ranking very quickly.

How to use our keyword position checker?

Using our service is absolutely simple and straightforward. You don't need to be a SEO expert to do it, actually you don't even need a technical expertise. Below are just 4 steps that you will need to follow:

Enter the keywords which positions you want to check. Our online ranking verification service allows you to use up to hundreds of thousands of keywords. But you can always start small with a few dozen (or hundreds) of keywords.

Once you finish entering data, the service will automatically begin to collect your positions. You'll just have to wait a bit!

How to use keyword position tool to do the miracle in your SEO?

Rankinity is a search engine ranking tool, so it scraps the search engine results pages for the keyword/phrase you enter to determine the ranking of the relevant website.

But what if you already have a list of your website positions that you got from Rankinity? What should you do if you're not happy with your website's positions? 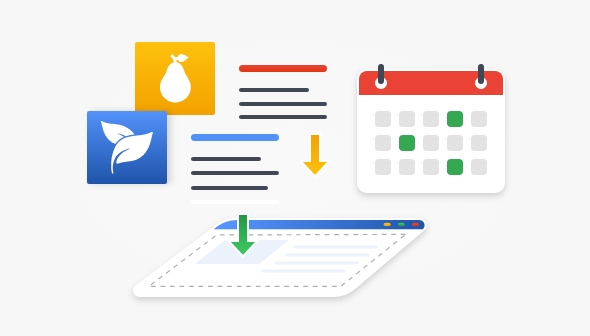 Successful sites publish quality content on a regular basis. It's not necessarily tons of new articles. It's often enough to publish 4-5 quality articles per month. 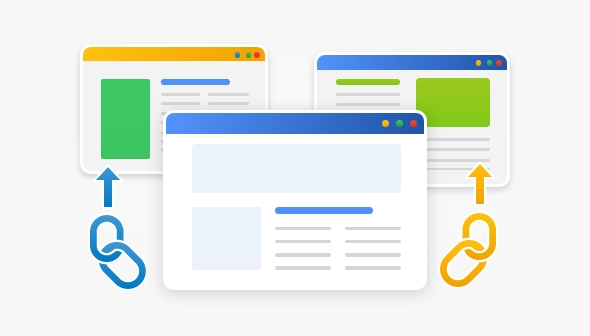 You get quality backlinks. And they don't have to be necessarily a lot. 10 good links every month can sometimes create a miracle! 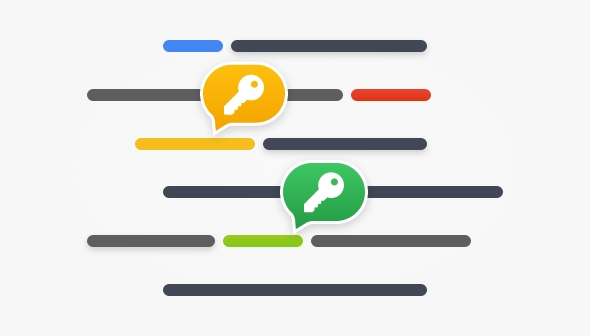 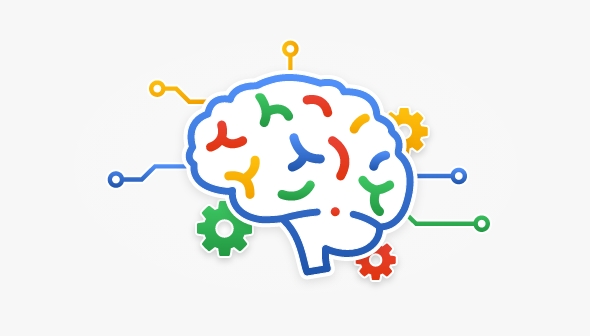 If we talk about the frequency of position monitoring, it's enough for you to do it 3-4 times a week to be in the know. And daily position analysis with quick decision making on your content plan is top notch!

Is it possible to determine your organic ranking in Google with utmost accuracy in 2022?

For a long time, there was no accurate way to know your website's ranking in Google due to personalized search results. This was compounded by geo-dependence - the positions of the same site began to diverge even more. Users in some regions saw one ranking while users in other regions saw a completely different ranking.

Google's data centers also had an impact on this. The data from one data center could be different from the data from the other. For example, Google Webmaster Tools reported that you were ranked #3 for the keyword "best smartphone ranking". When you personally performed a search on Google, your site showed up as number 1, but your friend who lives 50 miles away and uses a different ISP saw your website as number 6. Unbelievable, don't you agree! Google then released a new feature in the Webmasters Tools under Top Search Queries that gave much more data about the true ranking.

How it was possible in Google Webmaster Tools 12 years ago back in 2010?

Let's go back to 2010 and show how it was possible. Here's what Google's true organic ranking data looked like across all data centers:

In 2022 you could only get an average position!

You could get a fairly accurate picture when you compared this data with Google Analytics, using the same dates, geographic location and keywords.

But that's all in the past. Let's go back to the present in 2022. Now Google Search Console only produces your average position. And you won't get any more or less accurate organic search data from Google. You can get them (with some accuracy) when you use Rankinity. And remember that if Google hides this data, there is a lot of value in it.

On behalf of the Rankinity team, we sincerely wish you good positions!

What users are saying?

* You could rate Rankinity only once.
If you try to do it more times, you'll change your previous value!

View your positions right on your phone

Want to check rank on Google? The answer is here: